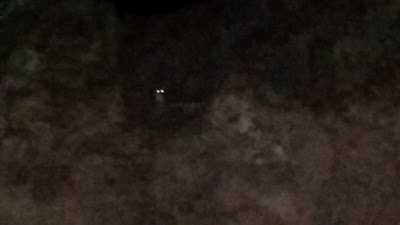 
The ringtail is buff to dark brown in color with white underparts and a black and white "ringed" tail that has 14–16 white and black stripes, which is longer than the rest of its body. The claws are short, straight, and semi-retractable. The eyes are large and black, each surrounded by a patch of light fur. It is smaller than a house cat. It measures 12–17 in long to the base of the tail with the tail adding another 12–17 in. It can weigh from 1.5 to 3.3 lb.

Typically weighing around three pounds, ringtails possess superb hearing and eyes that allow them to move about at night. A nocturnal creature, the ringtail's large eyes and upright ears make it easier for it to move about in the dark. Its fur ranges in coloring from tawny to grayish, and a pointed muzzle with long whiskers resembles that of a fox - which is appropriate in that its very name means ‘clever little fox’. Its tail is about a foot long, with seven to nine black rings and is about the same length as the animal's body. Like its namesake, the ringtail uses this tail for balancing when moving about its habitat. The tail also serves another purpose, acting as a distraction for potential predators. The white rings provide predators with a focus other than the ringtail itself; by grabbing the tail rather than the body, the ringtail has a greater chance of escaping. Additionally, their semi-retractable claws and long tail provide the ringtail with tools ideal for climbing.
Posted by Admin at 6:04 PM